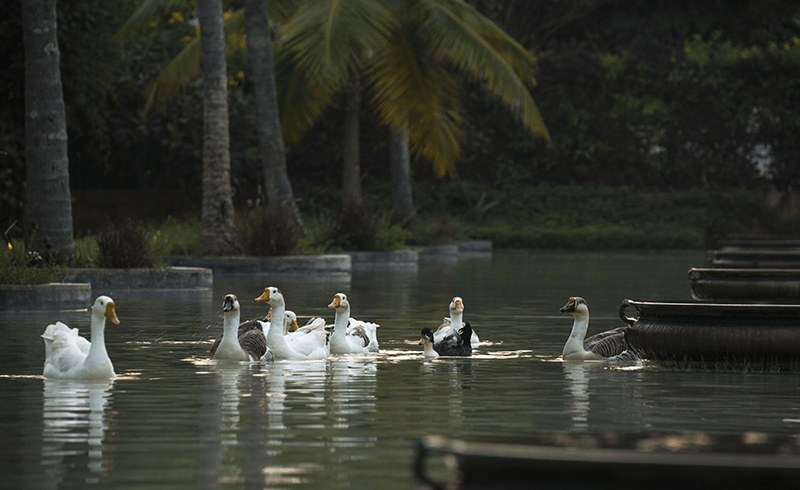 Is a Hindu temple located on the top of Chamundi hills about 8.8Km away from the resort and its average elevation is 1,000 meters. The original shrine is thought to have been built in the 12th century by Hoysala rulers while the tower probably built by the Vijayanagara rulers of the 17th century. In 1659, a flight of one thousand steps was built leading up to the 3000 foot summit of the hill. There is a huge granite Nandi on the 800th step on the hill This Nandi is over 15 feet high, and 24 feet long.

On the banks of Holy river Kaveri is a tiny tranquil town of Somanathapura. Here stands the finest and most exemplary monument of Hoysala architecture known as the famous Prasanna Chennakesava Temple or simply the Kesava Temple. Consecrated in the year 1258 CE, it is a Vaishnav Hindu Temple dedicated to might and beauty of Lord Krishna (Chenna= Beautiful and Kesava= Krishna). Tourists from near and far come to visit the temple to get a view of the beautiful place. The Chennakesava temple is one of the 1500 Temples built by the Hoysala Empire kings in different parts of their kingdom, and is said to be the climax development in Hoysala temple style and yet is unique in many other ways. A classic example of the famous Hoysala architecture, and is one of the three temples of the kind to be nominated in the Unesco World Heritage list. Unfortunately, this temple is no longer used as a place of worship because the idols have been broken and desecrated by the invading Muslim armies. However, the beauty of the temple still charms thousands of visitors who visit the site to witness the magnificent artistic and engineering achievements of the era, to seek the Lord's blessing and admire the delicate carvings and sculptures, whose beauty is unequal and as unique as the God that it houses.

This museum is located near the Mysore Railway station and is the second one of its kind established in India after the one at Delhi. This museum exhibits ancient locomotives and carriages, some of which are still in working condition.

An incredibly breathtaking example of Indo - Saracenic style of architecture, the Mysore Palace is a magnificent edifice located in Mysore in the state of Karnataka. Also known as the Amba Vilas Palace, it is the former palace of the royal family of Mysore and is still their official residence. Referred to as the 'City of Palaces', Mysore houses seven other places, but none come close to awe - inspiring grandeur of this palace. Mysore Palace was built in the year 1912 for the 24th Ruler of the Wodeyar Dynasty and is counted amongst one of the biggest palaces in the country. The construction of the Mysore Palace was orchestrated by the Maharaja Krishnaraja Wadiyar IV referred as "Rajarishi" (saintly king) by Mahatma Gandhi. It was then further expanded by his son and the last Maharaja of Mysore, Maharaja Jayachamaraja Wadiyar. The facade of the palace is a harmonious blend of Hindu, Muslim, Rajput and Gothic styles which imparts it a regal quality. With the Chamundi Hills towards its eastern side, the spectacle of the Mysore Palace is an enchanting sight to behold. Needless to say, it is the second most visited historical monument visited by both local and foreign tourists after the Taj Mahal. Presently located inside the Old Fort, Mysore Palace is renowned for its light & sound show and vibrant Dussehra celebrations.

Brindavan Gardens lies adjoining the Krishnarajasagara dam (KRS) which is built across the river Kaveri. Garden is spread across an area of 60 acres. The garden is laid out in 3 terraces which contain water falls, trees, flowering plants, topiary works, pergolas, gazebos.  The main attraction of the park is the musical fountain with synchronised to the music of songs.

Sri Chamarajendra Zoological Gardens, also known as the Mysore Zoo is one of the best zoological gardens in India. Maharaja Chamaraja Wodeyar established this Zoo in the year 1892 for the Royals. Furthermore, after the attainment of freedom, it was handed over to the Department of Parks and Gardens of the State Govt. The Zoo's meticulous planning is responsible for making it a special zoological garden. It tends to create a natural habitat for the animals in it. From Big to small cats, Aquatic to terrestrial birds, and Primates to reptiles, one Hundred and Sixty-Eight species find their place in this zoo. The world's first caesarian section delivery performed on an elephant in Mysore zoo gave it global fame and recognition.Located near the palace in Mysore, The Zoological Garden covers an area of 157 acres. It is one of the oldest and most famous zoos in India. It plays the role of an orphanage to the abandoned animals. Various exhibitions are regularly held here with an insect exhibition stealing the show. Following this, the Zoo carries forward certain Education Programmes such as Youth Club activities, Literary Competitions, and Summer Camp activities. The Karanji Lake was put under Zoo jurisdiction in 1976 and since has been a calm and serene place for boating.

Karanji Lake, located in the city of Mysore, is a perfect site for relaxing and celebrating a day out with the family. It is sometimes also referred to as the fountain lake. A lot of people come here to celebrate picnics with their loved ones. Visitors are allowed to bring packed food, and there is a coffee shop as well situated near the lake for the coffee lovers. It is a beautiful place to explore the different species of birds as the lake exhibits as many as 147 species including herons, Asian openbill storks, cormorant, grey pelican, etc. thereby making it a mind drawing place for the bird watchers. The Karanji lake is said to possess the largest aviary in the country. Its set up cost was nearly 3.8 million, and it measures 20m in length, 50m in breadth and has a height of 60m. There is a waterfall too with two water bodies alongside. The lake also consists of a butterfly park which is home to more than 45 species of beautiful butterflies fluttering their wings and flying around in brilliant colours. Nectar, as well as host plants, have been planted in the park to help the butterflies sustain. The mesmerising lake also consists of a Regional Museum of national history which is situated on the banks of the lake giving out information on the natural environment of South India and how to maintain it. The enthralling lake was formerly a part of the Mysore Zoo and is under the control of Mysore Zoo Authority. The Karanji lake measures around 90 hectares (out of which 55 hectares is the water area, and 35 hectares was the foreshore area) and due to its popularity earn revenue of about INR 50,000 per day. It was initially constructed by the king of Mysore as a percolation tank and became a property of Mysore Zoo Authority in 1976. The area is adorned with lush greenery and abundance of fauna, making it a top-rated tourist attraction.

Home to over 2000 birds, the Shuka Vana in Mysore is a must visit for ornithophiles and nature lovers. With over 450 varied species, this striking 50m high aviary spanning an area of 1 acre currently holds the record for most bird species in an aviary in the Guinness Book of World Records. This unique park, commonly known as parrot park, is a part of the Avadhoota Datta Peetham in the Sri Ganapathi Sachidananda Ashram, and also serves as a rehabilitation centre for abused, injured and abandoned birds. One can find many rare species of parrots flying around this beautiful enclosure. The revered seer of the ashram, Sri Ganapathi Sachidananda Swamiji believes that birds are vital to the existence of other species, and their diminishing numbers in recent years have been a cause for alarm and a call to action. Through this initiative, he hopes to inform, sensitise, and grow a sense of respect and friendliness amongst the general public towards the avian species. Parrots here have been assigned as per the zodiac signs they are connected with, and one can find a parrot that represents their birth date and planet as per Indian astrology. Parrots here can also be found to symbolise days and months of the year. It is quite impressive to observe a large number of these delightful creatures, considered vessels to invisible spirit dimensions.

9.Other Activities Include: Please contact the reception for options and guidance. 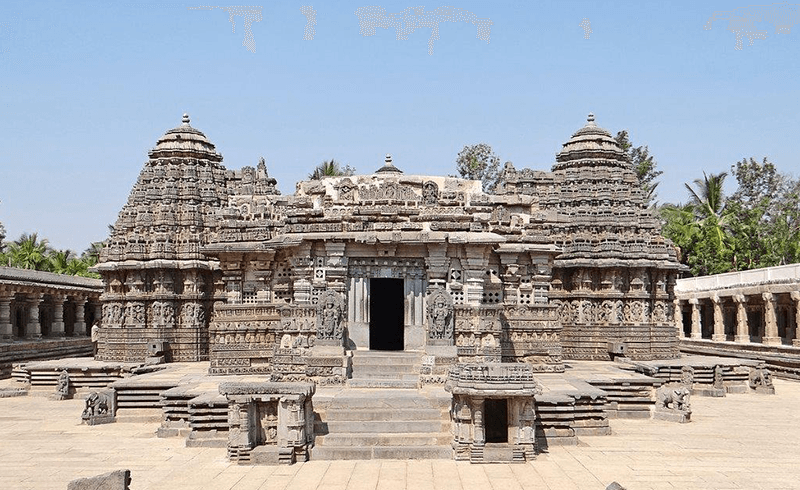 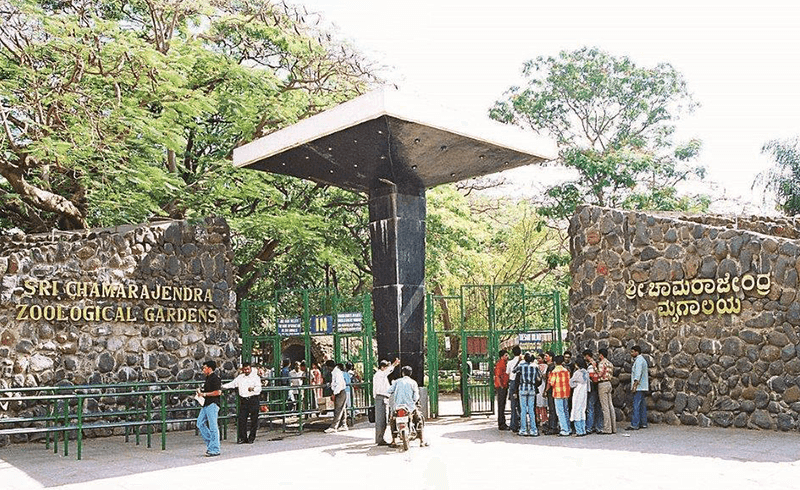 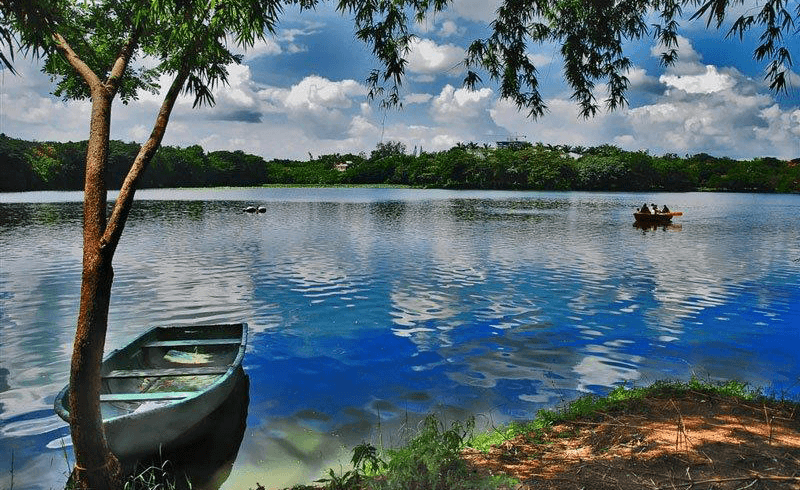 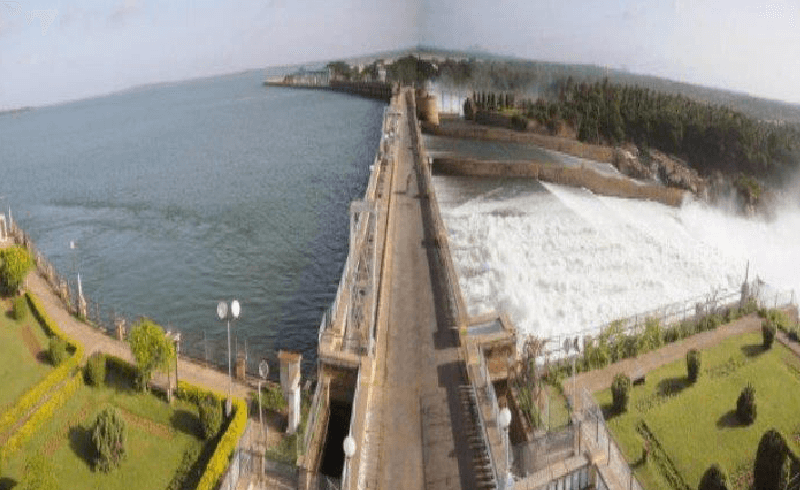 By Air: Closest airports: Bengaluru International Airport (185 km away) is well-connected to most major international destinations and Indian cities.

By Bus: Volvo buses travel between Bengaluru and Mysore every 10 minutes.

All Windflower properties are incredibly secluded, yet easily accessible. Do call us for quick guidelines to find your way. For guests travelling by train or air, we can organise a pick-up on request. (on charge)

For the self drivers please click on the Google maps link for driving directions.